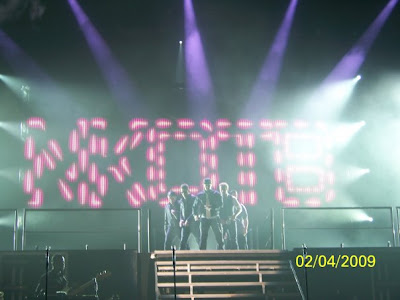 As a little girl I was completely infatuated with the band New Kids on the Block. I loved them. I had music and posters and shirts and games and dolls and well you get the idea. :) Last year they announced their reunion tour! I was so excited. I even downloaded some of their new stuff to my computer. Last night they were in my little town on the river. And I got given the opportunity to go. I was so excited!
They put on an awesome show! They sang alot of their old stuff, which was fabulous, and even some of their new stuff which I really like too! The men were outnumbered about 100 to 1 I bet. Alot of the girls dressed up in their best 80's gear with the crimped hair, blue eyeshadow, side pony's, leggings, jelly bracelets. Yep I saw it all.
The 5 had all of us on our feet screaming and yelling most of the night. My throat still hurts just a little bit. We sang along and yelled at the band how much we loved them, I was all about Joey and told him so last night from my seat. :)
Danny, Donnie, Jordan, Jon & Joe, you guys are amazing and I will come to another concert of yours if you come back somewhere near my small bend in the river. Thanks for the great time! I kindof wish I was the lucky lady in the front row who landed a long smooch from Donnie himself, I probably would have fainted. :D
Thanks guys for making the night so much fun. And to the girls who I went with, thanks for letting me tag along. It was the Best night ever! And I think one of the best concerts I have ever seen. So much energy!
Well that is all I have to say for now. Thanks for reading!
A.Berry

Here is a pic of Joey, just cause he is soo nice to look at! 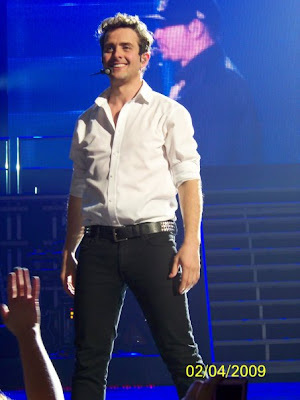 Posted by QCMama at 1:24 PM No comments: 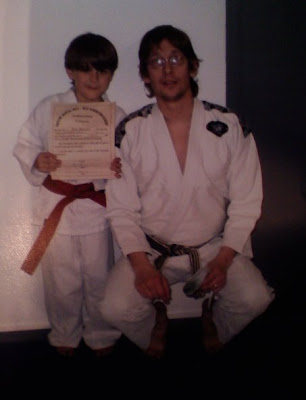 My kids have been in school for a while now. This is K's first year and she loves Kindergarten. N is in the 2nd grade and really likes it too, for the most part anyway. The 2 of them have been going to the same school since K was 18 months old. I love that everyone there knows my kids, knows what they have gone through in the last few years and understands. That is the reason I fought to keep them there when the district tried to tell me K couldn't go there but N could.
Flash forward to the beginning of this year. I was living with my grandmother who was not in the best health. I also had just had MJ so she was pretty tiny. Every morning I would get up take care of getting grandma's breakfast and medications and get her comfy in her chair. Then it would be time to get the 2 older kids up and ready for school. Now my kids are probably the slowest kids on the planet unless it is something they really want to do. They drag their feet every morning and have to get lots and lots of reminders. After getting them ready I had to wake up MJ get her bundled up, strapped in, changed, fed. You get the picture. That's alot to do in the morning for 2 parents let alone 1!
I think this would be a good time to point out that our school district decided that this year kids need to start school a few minutes before 8 in the morning. This being said let me also tell you the school's 'drop off policy' for the children. The school grounds will not be supervised until 7:45, so you are not supposed to drop your child off before that. School starts at 7:55. No slack time, no tardy bell if you aren't there you are late period. I think this is ridiculous! You have 10 minutes to drop off your children while the other 150 parents are dropping off their children at the exact same time! It leads to traffic jams and just chaos! Thanks to their being no school bus, if you want to you can use the city bus but I refuse to put my 5 and 8 year old on a city bus alone, we are late quite a bit. And usually we are sitting in a line waiting to get close enough to drop them off. If they are late it usally isn't even by 10 minutes. But none the less they are still "tardy" and guess who is held responsible....yep me. I know that to teach them to be prompt and on time is important but wow! I just don't know how people do it alone and keep everything perfect and whatnot. I have a very hard time getting up ready, getting them up and ready fed breakfast, brush teeth, shoes, coats, back packs, car started, baby up ready fed changed all that fun stuff in less than an hour and a half! which means I should technically start waking them up at 5:30 or so so we can be ready, and out the door by 7:20 just to sit in a ridiculous line and wait and you know what...chances are...they will still be late for school....Remember..They are slow! And then that's my fault too!
I guess I am just in a bad mood today. I would love to be able to homeschool them....but honestly don't think I have the patience, and I think the social interaction they get at school is really important. I don't think I would be able to find the resources or coops that other homeschooling parents find. I don't know though...I am seriously beginning to think about it! Then they would never be late! :)
Posted by QCMama at 8:39 AM No comments: